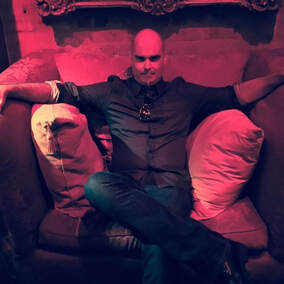 ​Theodore Vincent Torres, Jr. was born in New Orleans on March 24th, 1972, and like most writers Ted began telling stories at a very early age. He used pen and paper, but also a surprisingly diverse collection of materials ranging from projector slides to 1/2" VHS video. During his years at Holy Cross High School in New Orleans, Ted entered an annual film festival sponsored by Louisiana State University and won four years in a row. Naturally, this inspired him to dream of one day going to film school and pursuing a career as a film director.

But despite the support of family and friends, life had a different agenda for Ted. In 1996, he earned a B.A. in English Literature from the University of New Orleans and fell in love with the written and spoken word, absorbing the classics of both the British and American literary canon, and ultimately, adopting the novel format as his primary means of storytelling. In 2001, Ted published his first novel, The Petrified Christ, during a break from writing a larger more complex piece that would eventually become his second novel, 2006's Scenes from the Blanket.

In 2017, the books became available in what Ted now calls his Special Collector’s Editions, "released as part of The Blanket Trilogy, "the third book of which, Darker Prometheus, was published in 2019.
​
In 2021, Ted published his fourth book, a short-story collection entitled, The Zen of Elevator Travel.

For the better part of the past thirty years, Ted has been fortunate enough to work regularly as a professional bassist. It truly is his other half. And to this day, he continues to perform with a variety of working bands.

He's had the privilege of working on world-famous Bourbon Street in the heart of the French Quarter during a period of his life that provided just the musical boot camp which would later benefit him a great deal as he navigated the music scenes in other cities after Hurricane Katrina. Getting attention based on the amount of material and styles that he could play was easy in the cover band market of Birmingham, Alabama where he settled after the storm, and when it was discovered that he was both a bassist and a vocalist, the combined resources placed him immediately into a certain rare and in-demand bracket. In that sense, he's been very fortunate to work regularly out-of-state as well.

Ted's six years on Bourbon Street provided him with a wealth of source material for his writing, as has his personal experiences working and exploring the New Orleans French Quarter, and it's this aesthetic that Ted tries to bring to every piece of writing that he sets there.